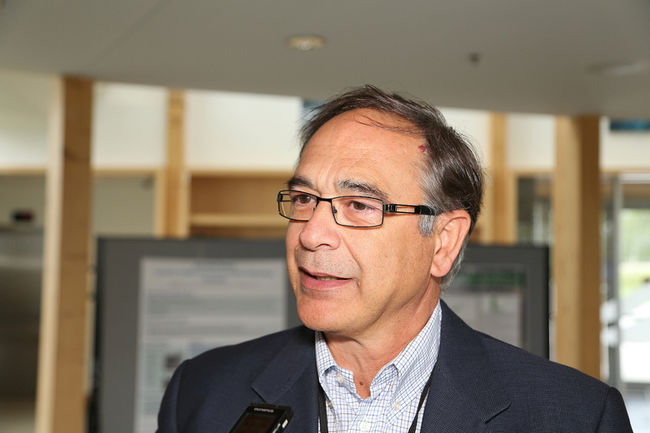 With luck, ingenuity and some scientific know-how, Sudbury’s tailings ponds could become a new source nickel, copper and zinc.

“The topic of discussion is developing technologies that aim to remediate waste and effluent waters from mining operations in Sudbury and British Columbia,” Vlad Papangelakis, a professor at the University of Toronto and the project lead of the biomining research, said Wednesday. “We hope to recover some value from locked metals in these residues that will offset the processing costs.”

The value of residual nickel in Sudbury tailings amounts to $7 billion, according to recent world nickel prices.

“There is significant economic interest, therefore, to use the eco-friendly processes being developed by (biomining) for remediation and base metal extraction,” symposium organizers said in a release.

But as Papangelakis points out, researchers are less motivated by potential profit than they are by the prospect of cleaning up the tailings in environmentally-friendly ways.

“The goal is to mitigate environmental damage and in doing so, try to recover as much locked metal as possible to make a profit and offset the processing cost,” he explained.

Researchers have secured funding for five years, including $4 million from the Ontario Ministry of Research, but could expand their work to 10 years.

“So we cannot see things from a snapshot of today’s economy and metal prices,” Papangelakis said. “We have to look in the future … There are too many unknowns here. We are generating new knowledge.”

Researchers hope to harness the naturally occurring microbes near tailings ponds to use them to metabolize the waste products.

“The best bacteria are those that exist in the contaminated areas because these are already adapted to the chemistry and the metals and the toxicity of the environment,” Papangelakis said. “We will simply try to make these bacteria happier by changing the conditions and how we feed them in order to steer certain chemical reactions in the direction we want to remediate and to try to recover some metals.”

As Papangelakis points out, the bacteria are simply catalysts that facilitate and speed up the chemical reactions that would have taken place anyway.

There are three broad research groups, each tackling a different aspect of the phenomenon. Papangelakis and his colleagues at the University of Toronto are working with tailings with a high sulfur content and 0.7 per cent nickel in a lab or reactor.

“They have to put them somewhere else to do the chemistry,” he said.

The group from LU will be doing passive, in situ treatment of the tailings.

“It’s remediating without moving anything, actually,” Papangelakis said. “This is possible because there’s low sulfur content in the rocks and tailings.”

The group from UBC will look exclusively at effluent water, which contains selenium.

“The selenium problem is also a Sudbury problem,” Papangelakis said. “Selenium is everywhere in the rocks and the minerals, which are extracted. It ends up in the tailings and as a consequence it ends up in seeping waters and must be controlled, because it’s highly regulated.”

The three universities will come together to help each other out and to “remediate the toxicity of tailings and effluent in the mining industry,” Papangelakis concluded.